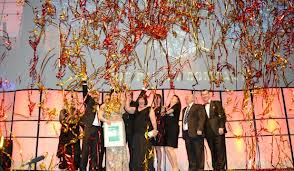 Chair of judges Chad Wilkie says the company excelled in its awards entry and provided evidence of its increased profitability and revenue.

Established in 1995 as a recycler of used wooden pallets, The Pallet Company has grown from a one-person operation to employing more than 65 staff. It offers total wooden packaging solutions including heat-treated and fumigated pallets for export, and is a registered supplier to Zespri and Enza.

Managing Director Nick Barton, who started the company when he was 18, believes that with hard work and determination a small idea can grow into a market-leading business.

More than 550 people attended the 18th annual awards ceremony at The Trusts Stadium to acknowledge the winners of the evening’s nine categories and supreme award.

“The importance of striving for excellence shouldn’t be under estimated as a growth mechanism for businesses. Organisations like this year’s winners provide immense inspiration for other local ventures and improve their own performances throughout the awards entry process, ”says Mr O’Riley.

This year’s awards attracted 129 entries from a diverse mix of companies including from the construction, retail, health, and food sectors.

The Pallet Company won two other awards; Canam Group Excellence in Innovation and Improvement, and…

The Pallet Company was pleased to be once again the major sponsor for the ARHT Golf day held at Aviation Country Club.

This year our annual golf day was a complete sell out! with a record year…

The Pallet Company is once again the proud sponsor for the Auckland Rescue Helicopter Trusts Annual Charity Golf Day!

Come and join us for a great day…